The award was presented to Mr. Dorsey for his efforts and achievements fostering outreach, education, and information sharing between the FBI, DHS, and other agencies and local organizations and businesses – mostly in his service as Board Member and the current President of InfraGard Birmingham Members Alliance (IBMA).

Asked about the recognition, Mr. Dorsey answers “I have a deep respect for law enforcement, and now that I’ve come to know so many over at the FBI office, to be acknowledged for contributing anything worthwhile in return is truly humbling.”

“I was very surprised by this,” he continues. “I feel like I have just been doing what I could to keep things moving forward through an extraordinary couple of years. Also, there isn’t anything I’m being recognized for that I did alone.  Other board and chapter members have been heavily involved in what we’ve accomplished, so I feel I’m accepting this for our Chapter. ‘Though they’ll have to come by my office to see it,” he says, grinning.

Since 2018 Mr. Dorsey has focused on outreach initiatives resulting in numerous large-scale events, including active shooter and violence preparedness training for houses of worship, and two annual conference series on fraud and crime prevention. One of those focuses on the financial sector for financial professionals, examiners, and law enforcement agents.  The other focuses on the healthcare sector for healthcare executives, managers, and nursing students. Since COVID, both have thrived virtually and, this year, in a hybrid format, drawing hundreds locally and nationally.

Under Mr. Dorsey’s leadership, the IBMA established joint efforts and resource sharing with the Huntsville, Mississippi, Louisiana, and North Florida InfraGard chapters, and helped restart the Mobile Chapter. Russ’s focus on inter-organizational cooperation has resulted in working partnerships with multiple organizations across several sectors, each of these partnerships supporting their own events and initiatives.

Mr. Dorsey has a thirty-five-year career in information technology and cyber security, both as an entrepreneur and, since 2014, as IT manager and now Principal and CIO with Kassouf & Co., a Birmingham-based CPA and advisory firm. “I am very fortunate to work for an organization that supports this level of community involvement,” he says. “The Firm’s leadership has committed resources well beyond my time to insure many of our events were successful.”

Since 1990, the FBI has recognized individuals and organizations whose achievements in the terrorism, crime, drug, gang, or violence prevention/education field had an exemplary impact on the community. Each year, the SAC of each FBI field office selects an individual or organization that has made a major contribution in these areas.  Prior local recipients of the DCLA include the US Space and Rocket Center in Huntsville, the Birmingham Civil Rights Institute, The Wellhouse, and Children’s Policy Council of Jefferson County.

Mr. Sharp, now Assistant Director of the FBI’s IT Infrastructure Division at the FBI’s campus in Huntsville, AL, had nominated Mr. Dorsey for the DCLA while still the Birmingham SAC, and made a point to come back for the presentation. 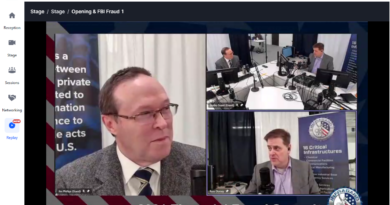