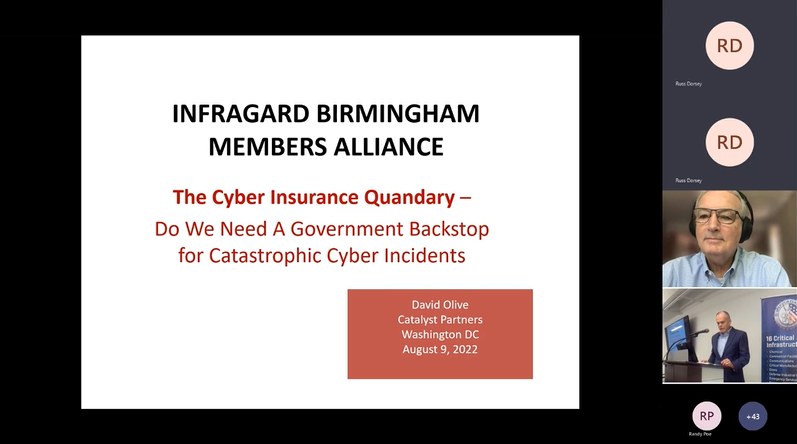 For our August meeting we welcomed David Olive who delivered an in-depth analysis of July’s General Accountability Office Report To Congress on Cyber  Insurance and the threat to the cyber insurance industry.

According to the GAO report: “Cybersecurity risks facing U.S. critical infrastructure are significant and growing. Cyber insurance is one tool policyholders can use to help offset some of the losses that result from cyber incidents. However, it is a tool that has been calibrated for non-catastrophic events. Whether insurers will continue to make coverage available for large cyberattacks with systemic effects resulting from the connectivity of interconnected systems is uncertain.”

David M. Olive has more than 40 years’ experience in business, politics, law and public affairs.  As former chief of staff to U.S. Rep. Asa Hutchinson (R-AR3) and a former staffer for US Senator Jim Allen (D-AL), Mr. Olive understands that very few things get done in Washington without approaching them in a bi-partisan manner.  Upon leaving Capitol Hill, Mr. Olive oversaw the aviation, antitrust, telecommunications, and information technology practice group as senior vice president of the public affairs firm, Powell Tate. In 1999, he left Powell Tate to develop a government relations practice built around helping businesses interact with federal and state governments. Mr. Olive is a Fellow at the GWU Center for Cyber & Homeland Security. He also established and currently serves as the moderator of The Washington Homeland Security Roundtable and is a frequent contributor to Security Debrief, a homeland security blog. In 2005, The Hill named Mr. Olive one of the top Homeland Security lobbyists in Washington, D.C.

February 9: A Glimpse Inside the Insider Threat